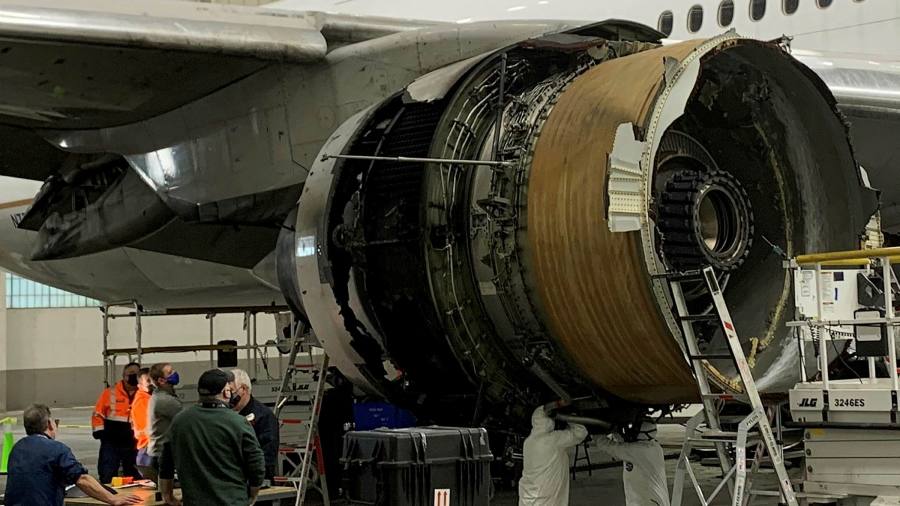 Federal investigators have said “metal fatigue” was likely responsible for a Boeing 777’s engine rupturing over the weekend, raining metal on the Denver suburbs.

The incident, which occurred four minutes after takeoff, forced the United Airlines flight to Hawaii to turn around and make an emergency landing at the state capital airport. from Colorado. No one was injured either during the flight or by the falling debris.

The situation aboard Saturday’s flight bore some similarities to a Japan Airlines flight in December and a United flight three years ago. In both cases, the fan blades broke in a Pratt & Whitney PW4000-112 engine on a 777.

The United States National Transportation Safety Board is investigating the Colorado incident. The United States Federal Aviation Administration has ordered the inspection of 777s equipped with PW4000-112 turbines, with the likely result of shortening the intervals between checks.

Dozens of large Boeing 777 aircraft equipped with engines have been anchored across the world following the incident. Boeing has recommended airlines stop flying jets until aviation regulators establish “the proper inspection protocol.”

“We want to understand if there is any relationship between this event and other events that have taken place around the world,” NTSB Chairman Robert Sumwalt said on Monday.

Sumwalt said one of the 22 turbine fan blades snapped at its root and struck a second blade, causing it to snap in the middle.

“Regarding the fan blade which was fractured at the root, a preliminary on-site examination indicates damage consistent with metal fatigue,” he said, adding that investigators plan to study the records. jet maintenance.

Records from aeronautical data provider Cirium suggested that maintenance was being performed by United Technical Operations, the maintenance, repair and overhaul division of Chicago-based airline Pratt & Whitney working on some engine components. The UTO website states that the unit’s facility in San Francisco is the only one in the United States equipped to run on the PW4000-112 engine.

The 777 also suffered damage on Saturday from falling metal in the area where the wing meets the body. The hood, which covers the front of the engine, ended up in a yard in Broomfield, Colorado.

Investigators will seek to understand why a fire in the engine continued to burn after crew members cut off the fuel that fed it and why the hood came off. Engineers design airplanes to avoid “uncontained engine failure” due to the dangers presented by shrapnel.

Although Saturday’s incident was technically not an uncontrolled engine failure, Sumwalt said: “From a practical point of view of the flying public, it really doesn’t matter.”